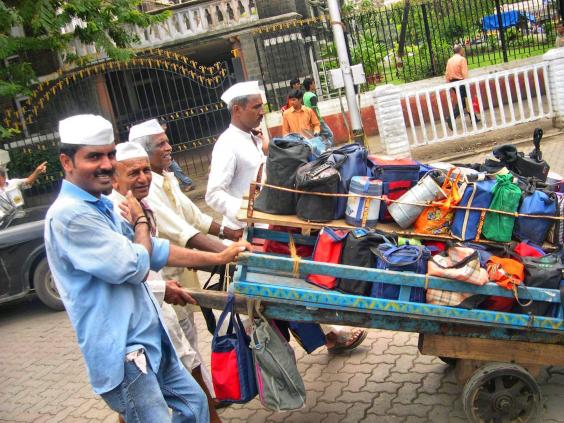 The dabbawalas (also spelled dabbawallas or dabbawallahs, called tiffin wallahs in older sources) constitute a lunchbox delivery and return system that delivers hot lunches from homes and restaurants to people at work in India, especially in Mumbai. When literally translated, the word "dabbawala" means "one who carries a box" .The lunchboxes are picked up in the late morning, delivered predominantly using bicycles and railway trains, and returned empty in the afternoon. They are also used by meal suppliers in Mumbai, who pay them to ferry lunchboxes with ready-cooked meals from central kitchens to customers and back.

Scurrying across the city from Virar to Nariman Point, from Kalyan to VT, about 5000  dabbawalas today manage about 2,50,000 dabbas between them!

Dabbawalas are the people who work hard , just not for the sake of food , but for others well being. It is rightly said- to quench others hunger is the greatest deed in the world.

Origin of Dubbawala service and the present position:

In 1890 Bombay, Mahadeo Havaji Bachche started a lunch delivery service with about a hundred men. In 1930, he informally attempted to unionize the dabbawallas. Later, a charitable trust was registered in 1956 under the name of Nutan Mumbai Tiffin Box Suppliers Trust. The commercial arm of this trust was registered in 1968 as Mumbai Tiffin Box Supplier's Association. The current president of the association is Bhau Saheb Karbande and Subhash Talekar is the spokesperson.

As the city grew, the demand for Dabba delivery grew too. The coding system created by our forefather is still prominent in 21st century. Initially it was simple colour coding but now since Mumbai is widely spread metro with 3 local train routes, our coding has also evolved into alpha numeric characters.

How the system works effectively?

A colour-coding system identifies the destination and recipient. Each dabbawala is required to contribute a minimum capital in kind, in the form of two bicycles, a wooden crate for the tiffins, white cotton kurta-pyjamas, and the white Gandhi cap (topi). Each month there is a division of the earnings of each unit. Fines are imposed for alcohol, tobacco, being out of uniform, and absenteeism.
A collecting dabbawala, usually on bicycle, collects dabbas either from a worker's home or from the dabba makers. 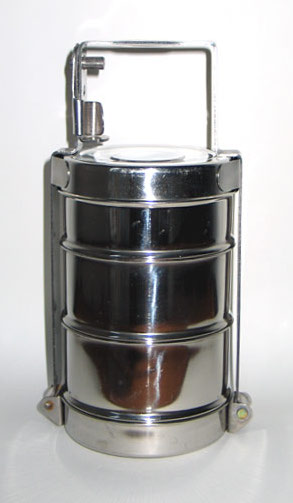 A dabba, or Indian-style tiffin box
As many of the carriers are of limited literacy (the average literacy of Dabbawallahs is that of 8th grade the dabbas (boxes) have some sort of distinguishing mark on them, such as a colour or group of symbols.

Box coding
The dabbawala then takes them to a sorting place, where he and other collecting dabbawalas sort the lunch boxes into groups. The grouped boxes are put in the coaches of trains, with markings to identify the destination of the box (usually there is a designated car for the boxes). The markings include the railway station to unload the boxes and the destination building delivery address. Some modern infrastructure improvements such as the Navi Mumbai Metro are not used in the supply chain, as cabins do not have the capacity for hundreds of tiffins.
At each station, boxes are handed over to a local dabbawala, who delivers them to the customers in their offices..Once the dabbas have been delivered to their offices, the entire procedure is repeated backwards. Dabbawalas now scamper across the city to collect the empty boxes, and then deliver them back home. It is a nine-hour work cycle of extremely demanding labour, ensuring that the cook and the consumer get their tiffins in time. Perhaps it is this punishing physical labour that holds back women from joining the dabbawalas - it remains a male bastion. The dabbawalas also allow for delivery requests through SMS.
How efficient is this service?
The president of the Mumbai Tiffinmen’s Association claims that dabbawalas only make a mistake once in every six millions deliveries, translating to about one going missing every other month. It works so well that it has been studied by Harvard Business School and is reportedly the envy of FedEx. Several management experts across the globe use Mumbai dabbawalas as a case study, citing their near-perfect managerial operations
What’s the financial cost for this time-saving exercise?
Around 450 rupees a month – depending on distance. That’s about the average for a sandwich and a packet of crisps in a city, let alone a delivered meal. And on the other end of the deal, each dabbawala is self-employed and paid the same, around 8,000 rupees a month, translating to about . It’s seen as a job for life, where the workers live by the philosophy, “Anna daan is maha daan”, translating to donating food is the best charity.

Prince  Charles was so impressed with their service that he had even invited 2  Dabbawalas to his marriage with Camilla Parker in London.

Roti Bank:
In December 2015, the Mumbai Dabbawala Association (MDA) came up with a plan to feed the destitute, needy and homeless people of the city.

This initiative gave birth to the 'Roti Bank' - an association collects leftover food from functions and distributes it among the poor. Since its advent, their waste management drive has saved Rs 40 lakh worth of food from getting wasted.

"From the eyes of dabbawalas, Mumbai as a city has two different sides. On one hand are the well-to-do families which generate humongous food waste and on the other hand is the downtrodden society that cannot even afford one meal in a day. Being one of the largest food delivery services in India, we thought it was our duty to bridge the gap between two and thus was born Roti Bank" said Subhash Talekar, the man behind the initiative, reports NDTV.

The MDA team has collaborated with many caterers, wedding planners and food joints across Mumbai. They also accept donations from individuals, communities or anyone who wants to help feed people. They then travel to different locations, collect food, check its hygienic standards and then distribute it within the next 3-4 hours. On an average, they serve 300-400 people on a daily basis.

They go to hospitals, railway stations, slums, religious institutes and  everywhere else that catches their eye. They engage themselves in drives, initiatives, events and encourage people to donate more and  waste less food.

Clothing Bank:
In the same vein, they have also kickstarted a 'Clothing Bank', collecting discarded clothes for the same purpose. It's quite amazing the kind of ambition the MDA team has taken for the welfare of people.

It is heartwarming to see what we as humans can do for our fellow beings if we have the right intent. Thanks to these guys lesser people sleep on an empty stomach and if join hands, maybe, one day, no one will go hungry.

We salute the spirit and deeds of the dabbawalas! You guys are awesome.

Posted by S.V.Sai baba at 7:05 AM No comments: Links to this post