Onam (Malayalam: ഓണം) is a Hindu festival and the state festival of Kerala celebrated by the people of Kerala, India.

The festival commemorates the Vamanaavatar of Vishnu and the subsequent homecoming of the legendary Emperor Mahabali. It falls during the month of Chingam (August–September) and lasts for ten days.


Mahabali's rule is considered the golden era of Kerala.
The following song (in Malayalam Language) is often sung over Onam:
...(Translation)


The festival is marked by various festivities, including intricate flower carpets, elaborate banquet lunches, snake boat races, Onappottan, Kaazhchakkula in Guruvayoor, Puli Kali, Kaikottikkali etc. These festivities make Onam a unique festival on the earth which is embellished by most number of cultural elements and it can be undoubtedly said that these elements constitute the colorfulness, diversity and richness that no other festival can claim.

The Customs of Onam Festival 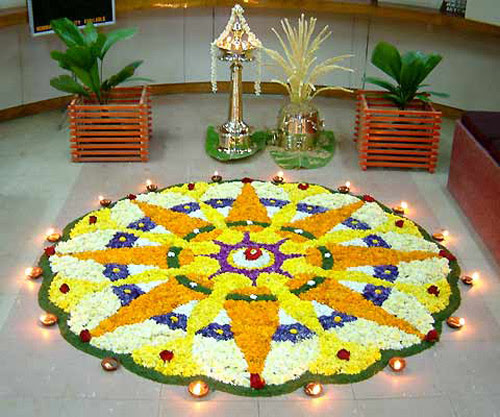 Pookalam
A flower carpet called 'Pookalam' is laid in front of every house to welcome the advent of the vanquished king, and earthen mounds representing Mahabali and Vishnu are placed in the dung-plastered courtyards.

Onam is in the air.Its time to revive our rich folk arts when women come out with their dances, especially kaikottikalli.This is the period from "atham" to Onam when the Malayali celebrates a bumper harvest and is in a festive mood.
The women-folk neatly decked up in mundu-veshti and ornamental flowers in their hair decorate their frontyard and "nadumittam" with flowers and light a lamp near an idol of Ganapathy in a gesture to overcome all hurdles in their pah to prosperity. 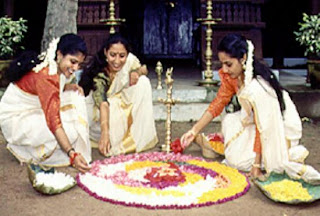 The simple rythmic group dance which involves clapping each other's palms while encircling the pookalam is what's known as kaikottikali, the essence of Onam.

Kaikottikali
Women, young and old, take part in the folk dance which signifies joy, happines and festivity. Though kaikottikali is neither a ritual form of dance or stage art, it derives its "ragachaya" from kathakali and the songs are based on episodes and legends like Krishnaleela, Shakunthalam, Kuchelavritham and Dhruvacharithram. Emphasis is given on rythmic movements than on mudra.The uniqueness of kaikottikali lies in the fact that the songs are sung by the participants themselves and the dance involves just simple steps in unison.

The most common ragams found in the kaikottikali songs include the Hussaini, Bhairavi and Kamboji and on several occasions the song deviate from puranic tales to folk stories.
Songs are also sung in praise of Saraswati, Ganapathy and Krishna which is considered to be very auspicious. Sadya over, on Onam day, women dance away to glory till the euphoria wanes.

Spectacular parades of caparisoned elephants, fireworks and the famous Kathakali dance are traditionally associated with Onam.

Kathakali dance
It's also the season of many cultural and sport events and carnivals. All this makes Onam-time a perfect period to visit this coastal state, touted as "Gods Own Country". No wonder the Government of Kerala has declared this time every year as Tourism Week.

d) The Grand Boat Race
One of the main attractions of Onam, is the 'Vallamkali' or boat races of Karuvatta, Payippad, Aranmula and Kottayam. Hundreds of oarsmen row traditional boats to the rhythm of drums and cymbals. These long graceful Snake Boats called 'Chundans' are named after their exceedingly long hulls and high sterns that resemble the raised hood of a cobra. Boat Race
Then there are 'Odis', the small and swift raiding crafts adorned with gold tasseled silk umbrellas, the 'Churulans' with their elaborately curled prows and sterns, and the 'Veppus', a kind of cook-boat. This traditional village rivalry on watercrafts reminds one of ancient naval warfare.

Thousands throng the banks to cheer and watch the breathtaking show of muscle power, rowing skills and rapid rhythm. These boats - all pitted against their own kind - rip through the backwaters of Kerala in a tussle of speed.

Onam is for All


Although this festival has its origin in Hindu mythology, Onam is for all people of all class and creed. Hindus, Muslims and Christians, the wealthy and the downtrodden, all celebrate Onam with equal fervor. The secular character of Onam is peculiar to this land where unity had always coexisted with diversity, especially during festivals, when people come together to celebrate life's unlimited joys.