The child prodigy Sushma Verma who cleared high school at the age of 7 is all set to pursue post graduation in Master of Science (M.Sc.) in Microbiology from Lucknow University at the age of 13!
Sushma, who is the daughter of Tej Bahadur Verma, a daily wage labourer has beaten all odds in pursuing her dream of becoming a doctor. After achieving the title of "youngest Indian" to pass the Class 10 at the age of 7, Sushama's name is mentioned in the Limca Book of Records.
When she was 10 years old, she took the Combined Pre Medical Test. At 13, when average students are in Class 7, Sushma has come a long way as compared to her counterparts. Presently, Sushma lives in a small room with also includes kitchen in Lucknow. She told a newspaper, "I am happy with what we have. Of course, I too want a lot of things. But I thank god for giving me the gift of learning." But Sushma is now worried about her age. "
After MSc I will not be able to sit for CPMT because of my age. So, I will do a PhD", she said. 13-yr-old has beaten all odds to pursue her dream of becoming a doctor. She also said, "I miss a better atmosphere, a better neighbourhood. But then, there are a lot of dreams... all of them cannot be fulfilled."
Not only Sushma, even her brother 20-year-old brother Shailendra was also a child prodigy who cleared Class 10 at the age of nine. Sushma gives all the credit for her success to her brother. Unlike other children of her age who have an easy access to mobile phones, internet, colour cable TV, this genius stands apart from those children.
The 13-year-old child prodigy Sushma Verma of Lucknow on Tuesday got a call from the vice-chancellor of BS Abdur Rehman University, Chennai offering her free education. Also, sociologist and founder of Sulabh International, pioneer in the field of sanitation and hygiene, Bindeshwar Pathak announced an amount of Rs 5 lakh for Sushma. Pathak will visit Sushma's home to hand over the cheque next week.

Congratulating the little genius, Pathak said, "The girl is an inspiration for students belonging to elite background. With the prize money, Sushma can fulfill her requirements. We will extend all support to the child further too.''
"Although I don't want to talk about it at the moment because I want my daughter to concentrate on her education and stop thinking about other things, it is true that some members of the Bollywood have shown interest in her career and want to finance it.

"Right from her education to hostel fees, they have been assessing her needs", Verma said.

Prof Manoj Dixit, proctor of LU said: "We have also received offer from Abhishek Patil of SKF Foundation, Kolhapur to finance her education. The university is also ready to waive her hostel fees."
Sushma initially wanted to do MBBS. But she couldn't appear in the test before reaching the age of 17.
So she decided to change her mind and opted for higher education. 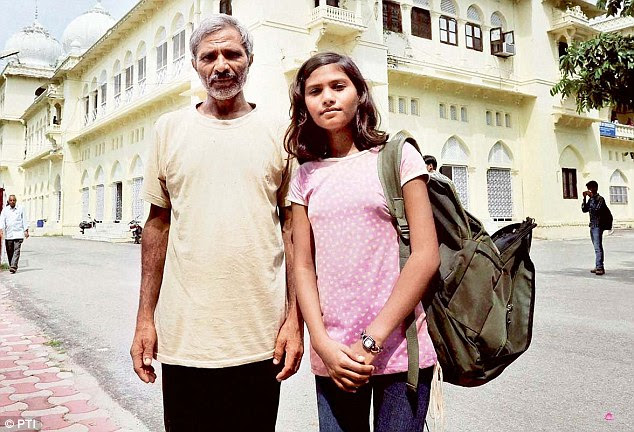 Bright future: Sushma Verma (right) with her father Tej Bahadur (left) at Lucknow University where she is pursuing an MSc in BiotechnologyAn article Published in The Hindu dated 4th September 2013 about her is given below

“Sushma’s future is secure as far as her studies are concerned”
Nobody will grudge the accolades earned by Lucknow’s child prodigy, Sushma Verma, and the offer of financial help from individuals and organisations for pursuing her studies. As the 13-year-old wonder kid basks in the glory of becoming the youngest student to pursue a Master’s course — M.Sc. in Microbiology from Lucknow University — it’s raining funds for her.

After noted film lyricist and one with a strong “Lakhnavi” connection, Javed Akhtar; a U.S.-based executive working with the Microsoft Corporation; and a Kolhapur-based charitable organisation, SKA Foundation, offered financial assistance to her, financial help for Ms. Verma has now come from Sulabh International.

The NGO has decided to adopt the child prodigy and will provide all possible assistance to her for pursuing higher studies. “The founder of Sulabh Sanitation movement, Bindeshwari Pathak, will honour Sushma Verma with a cash reward of Rs. 5 lakh when he visits Lucknow next week,” said Manoj Jha, adviser to Sulabh International. She had been described as a great motivator for children by the Sulabh founder, Mr. Jha added.

“Assistance has also been offered by Sunny Fernandez from Kuwait, Pradeep Agarwal from Goldrush, Lucknow; Shubodeep Kundu from Kolkata and Dr. Vinayak Prasad from the World Health Organisation for further studies. Sushma’s future is absolutely secure as far as her studies are concerned,” Manoj Dixit, Chief Proctor of Lucknow University, told The Hindu.
A tough road

Times have been hard for the Verma family. Sushma Verma’s father, Tej Bahadur, is a daily wage labourer and it was difficult for him to meet the expenses for her admission to Lucknow University. He had to sell one bigha of land to pay the first instalment of about Rs. 25,000 to confirm a seat in the university. The child prodigy’s name appeared in the second cut-off merit list for postgraduate courses declared on August 26. The family used to live in a dingy single room accommodation in St. Meera’s Inter College on Kanpur road, but they were asked to vacate the premises about two months ago.

Ms. Verma now lives with her parents in a single room in Bargawan village.
Professor Manoj Dixit said the university was arranging for a suitable accommodation where the girl could live with her parents. He said the parents and the girl herself were not inclined to her living in a hostel along with students of a different age group. Ms. Verma passed her Class 10 (High School) examination from St. Meera’s College at the age of 7 and Intermediate at the age of 10. She pursued B.Sc. in Zoology and Botany from CMS Degree College.

Her brother Shailendra holds the distinction of being the youngest Computer Science graduate at the age of 14.
Posted by S.V.Sai baba at 12:26 PM No comments: