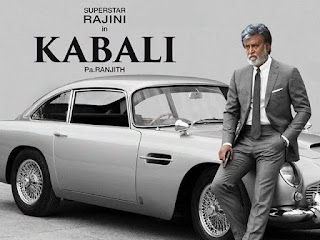 The recently released  Tamil/Telugu/Hindi movie Kabali of Superstar Rajnikanth has created many records in the film industry even before its release. I give below the hype created by the movie collected from Newspaper reports and websites.

Making of the movie
Kabali is a 2016 Indian Tamil gangster-drama film written and directed by Pa. Ranjith. The film stars Rajinikanth as the title character, whilst Taiwanese actor Winston Chao, Radhika Apte, Dhansika, Dinesh Ravi, Kalaiyarasan, and John Vijay star in other pivotal roles. Principal photography for the film began on 21 August 2015 in Chennai. While filming mostly occurred in Malaysia, smaller scenes were shot in Bangkok and Hong Kong.

Release of the movie
The film was released on 22 July 2016 in 3200 screens in India, which included 2200 screens in South India.Some 500 screens in US (including 250 each screens for Tamil and Telugu versions) also shows how the industry wants to capitalise on the first day itself, even if the audiences abandon it eventually. It shattered all the records for an Indian film worldwide. 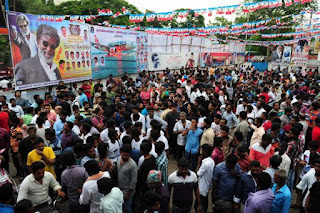 Kabali story in brief
Rajinikanth  as  Kabali spends 25 years of his life in jail, when he returns, he is in for a surprise, which is gradually revealed to the audience. Why was he locked up in a Malaysian jail for such a long period of time is shown in the flashback.
The rest of the film deals with what Rajini does to get back his lost life and how he achieves his prime task, for which he was jailed all these while. How he fights to save his world and help the downtrodden Tamilians in Malaysia forms the crux of Kabali.
For further details of the movie and its story in detail
visit:https://en.wikipedia.org/wiki/Kabali_(film)

Now these are the interesting news about the hype created before and after release of the movie:

Kabali Teaser trailer
Its teaser trailer was released in April 2016 and went viral in Asia and gained 5 million views in less than 24 hours becoming the most viewed teaser in Asia. As on date of this posting , the Kabali teaser garnered nearly 30 million views, making it one of the most watched Indian film teasers. Click the link below to watch the teaser:

KABALI TEASER
https://www.youtube.com/watch?v=9mdJV5-eias
Promotion of the movie :
The Malaysian airline, AirAsia became an official partner for Kabali and certain AirAsia planes were painted with a Kabali theme 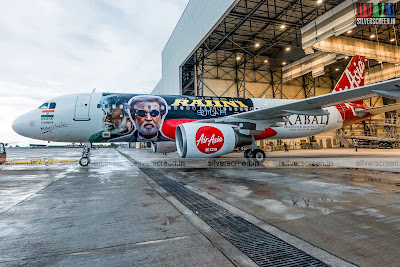 AirAsia, which is Rajinikanth starrer film Kabali's official airline partner, had also announced a 'Fly like a Superstar' offer to promote the movie.  The Rs 8,000 package included airfare from Bengaluru to Chennai, first show at Satyam theatre, and meals, among others. However, the last moment decision to change the venue from Sathyam theatre to Prasad Studio in Vadapalani, Chennai backfired. The airline is said to have arranged a show at Satyam theatre for 12.30 PM. According to one of the passengers, the people have been shifted to Sathyam cinemas to watch the morning show.

There are reports that some fans came all the way from London to watch the movie in Chennai theatres.
Like Air Asia many brands like Airtel have associated themselves with the movie, came up with creative merchandise to promote themselves along with the movie.
Muthoot Fincorp, flagship of the 129-year-old diversified Muthoot Pappachan Group,  launched the Lucky Superstar Silver Coin with image of the mega star and kicked off the 'Carry Lucky Superstar With You' campaign. 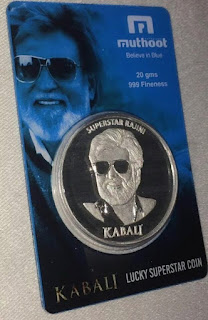 Fox star studios which has released  the movie in more than 1,000 screens in the North Indian market has jumped on the promotional bandwagon with a Kabali double-decker bus plying in Mumbai. 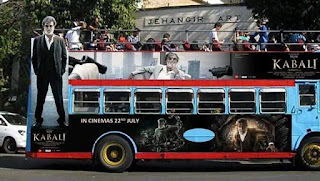 Mass booking of tickets and Holidays declared by organisations
There were many organisations who booked tickets for their entire staff members and declared holiday also to enable them to watch the movie.

Every movie release of Rajnikanth is accompanied by this type of hype and frenzied fans make a beeline to catch the first show. At hyperlocal delivery website Oyethere.com founder S.Shriram booked two Inox screens for Kabali for the staff and customers. 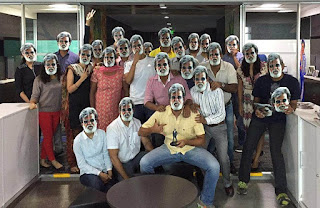 
In a temple in Tamil Nadu, his fans organised a special puja (prayer) where his idol was given a royal bath with milk, and a special abhishekam was organised for the success of the movie.

Corporate offices of Fyndus India Pvt Ltd, and Opus Structural solution based in Chennai and Bengaluru have declared a holiday on July 22, the day Kabali is being released, in order to prevent 'mass sick leave'.

These companies confirmed that they volunteered to provide free tickets to their employees to save the movie-makers a revenue-loss through online piracy.

According to the Times of India, a senior personal assistant to Tamil Nadu's Minister for Information and Publicity issued a note to Chennai's Abirami Theatre asking them to issue 10 tickets for the film's first showing.

FM stations are pitching in feverishly, offering free tickets for an SMS from a listener. Fans hoping to get lucky don’t mind their dimes spent for an SMS, and the mobile services are ringing in a fortune as the total number of SMSs have crossed over one lakh. “Neruppu Da” seems so appropriate as Kabali fever catches fire wherever it touches.
Box office collections
Ticket prices for the first two or three days went up from Rs 300 to Rs 500 in many places except multiplexes in Chennai city. While corporate and IT firms have made bulk bookings, theatres restricted under a slab of Rs 120 slyly instigate viewers to buy the tickets for Rs 500, for a ‘package’ of popcorn, snacks and soft drinks along with a Kabali ticket.

If the industry reports are to be believed, this Rs 70 crore movie has already ensured a pre-release recovery of Rs 200 crore, from various rights including theatrical rights, branding, satellite and audio, unmatched for any other Tamil films in the past.
If Salman Khan’s Sultan and Aamir Khan’s PK earnings surprised you, the box office collections of Rajinikanth’s Kabali will leave you shocked. According to verified collection data provided by producer Kalaipuli S Dhanu to IndianExpress.com, the Rajinikanth-starrer has earned about Rs 400 crore in four days. While Rs 200 crore is the box office collection, the film earned Rs 200 crore before release with sale of music rights etc.

Dhanu said Kabali has earned Rs 90 crore abroad in the first weekend, out of which Rs 28 crore came from the US itself where the film is among the top 10 films being watched in the country. The producer put Indian collection for the first weekend at around Rs 100 crore.


“I will never forget these days in my life. This release has given me so much happiness. It has broken the collection records of Indian cinema in the last 100 years,” Dhanu said.