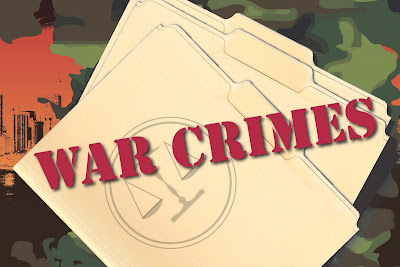 A war crime is a serious violation of the laws applicable in armed conflict (also known as international humanitarian law) giving rise to individual criminal responsibility.

Examples of war crimes include "murder, the ill-treatment or deportation of civilian residents of an occupied territory to slave labor camps," "the murder or ill-treatment of prisoners of war," the killing of prisoners, "the wanton destruction of cities, towns and villages, and any devastation not justified by military, or civilian necessity."

War crimes are serious violations of the rules of customary and treaty law concerning international humanitarian law that have become accepted as criminal offenses for which there is individual responsibility.

Colloquial definitions of war crime include violations of established protections of the laws of war, but also include failures to adhere to norms of procedure and rules of battle, such as attacking those displaying a peaceful flag of truce, or using that same flag as a ruse to mount an attack on enemy troops.

What acts are war crimes?

War crimes are defined by the Geneva Conventions, the precedents of the Nuremberg Tribunals, an older area of law referred to as the Laws and Customs of War, and, in the case of the former Yugoslavia, the statutes of the International Criminal Tribunal in The Hague (ICTY).

War crimes fall into three groups - or four if you include genocide.

Violations of the laws or customs of war, including:

Atrocities and offences committed against any civilian population, before or during the war, including:

Responsibility for such crimes

Leaders, organisers, instigators and accomplices participating in the formulation or execution of a common plan or conspiracy to commit any of the crimes above are criminally responsible for everything done by anyone in carrying out such a plan.

The fact that a person was obeying an order of his Government or of a superior does not free him from responsibility, but can be considered and may reduce the appropriate punishment
Source:
http://www.bbc.co.uk/ethics/war/overview/crimes_1.shtml

Some of the lesser known yet horrific war crimes and atrocities against human kind are listed below:

Killed 60% to 90% of its Population, the Deadliest (statistically) of Modern Times

The Paraguayan War as a whole included so many atrocities and crimes against humanity that it would be pointless to mention only one. The war that is also known (in Spanish) as "Guerra de la Triple Alianza" and in Paraguay as the "Great War" lasted for six years. It was between Paraguay, that fought bravely for its history and territory, against the attacking Triple Alliance of Argentina, Brazil, and Uruguay. According to various official and historical sources, the specific war was so brutal and deadly that it resulted in approximately 300,000 deaths to the heroic country of Paraguay out of its 500,000 inhabitants. According to many historians, including Harvard College Professor Steven Pinker, the incredibly high death ratio of the war exceeded more than 60% of the total population, while other estimations that are based on both disease and war estimate the number of deaths at over 1.2 million people, which                 would consist of over 90% of its pre-war population. One way or another, it's undoubtedly the most catastrophic war of our time and, statistically, one of the worst of all time, as well.


2. The Greek Pontic Genocide:
Over 350,000 People Killed for Being Greek
The Pontic Genocide is one of the darkest moments in history, not only for Greeks but also for mankind. The Genocide erased from its ancestral and historic homeland in Pontus a culturally vibrant and unique part of the Greek population that had been fighting for its survival for about 3,000 years. An estimated 353,000 Pontian Greeks were killed during the genocide, and about 1,100,000 Greek Orthodox Christians from Asia Minor (modern day Turkey) were relocated to Greece in the population exchange of 1923, thus ending thousands of years of Hellenic civilization in Asia Minor. The worst part of this is that the Turkish government still denies the specific genocide, along with a few others they committed against mankind, and call the specific holocaust nothing but a historical harassment.
3. Armenian Genocide:
Ottoman Turks Strike Again, This Time to Over 1 Million People
Not satisfied with the torture of Greeks, Turkish (Ottoman at the time) brutality extended to what is now called the "Armenian Genocide", one of the first of the 20th century. Despite the repeated invasions and occupations, Armenian pride and cultural identity never wavered. Unfortunately, that ended. The numbers were truly devastating; over two million Armenians living in Turkey were eliminated from their historic homeland through forced deportations and massacres between 1915-1918. Despite its historical accuracy and undeniable facts, the Armenian genocide has only recently been officially recognized as a war crime against humanity.

The European Parliament voted to recognize the Armenian Genocide on June 18, 1987, while American President Clinton issued a press release on April 24, 1994 to commemorate the "tragedy" that befell the Armenians in 1915.
According to some historians, the Armenian genocide is very similar to the Jewish holocaust in many respects. Both people adhere to an ancient religion and are religious minorities in their respective states. Both have a history of persecution, while both countries are relatively new democracies.

4. Katyn Massacre:
A Mass Execution of About 22,000 Polish Nationals
For those who are interested in History
Some might connect the Katyn massacre with Russia, but your average Russian will probably tell you that the Katyn Massacre was nothing but one more of the Stalinist crimes. It was one out of many crimes committed by the Stalinists and early Bolsheviks against various people, primarily ethnic Russians. Some historians believe that it is absolutely wrong to say that Russians and Stalinism are synonymous, just like all Germans were not Nazis. Millions of Russians died fighting the Bolsheviks during the Russian Civil War during Russian peasants' revolts in the course of the Stalinist collectivization. They were shot dead, executed by the Cheka, or sent to the Siberian labor camps. The Soviet Union was not a Russian state as we define Russia today.

However, the Katyn Massacre ranks as one of the worst war crimes of this bloody and evil era (WWII), and the specific mass execution was committed by the Soviet secret police against Polish nationals. In 1989, with the collapse of Soviet Power, Premier Gorbachev finally admitted that the Soviet NKVD had executed the Poles, and confirmed two other burial sites similar to the site at Katyn. Stalin's order in March 1940 to execute by shooting some 25,700 Poles, including those found at the three sites, was also disclosed with the collapse of Soviet Power. This particular second world war slaughter of Poles is often referred to as the "Katyn Massacre" or the "Katyn Forest Massacre."

5. Višegrad Massacres:
One of the Most Comprehensive and Ruthless Campaigns of Ethnic Cleansing
The Bosnian War was an international armed conflict that took place in Bosnia and Herzegovina between 1992 and 1995. The war came about as a result of the breakup of Yugoslavia and involved several factions and atrocities; the Višegrad massacres were only some of them.
The Višegrad Genocide, as it's also known, was nothing but a mini-holocaust toward the Bosniak population of the municipality of Višegrad during those dark days of the so-called ethnic cleansing of eastern Bosnia by Serb police and military forces. It is estimated that over 3,000 innocent civilians were murdered during the massacre, among them more than 600 women and nearly 120 children. Even though Muslims used to make up two-thirds of Visegrad's 21,000 people before the war, now only several hundred have returned to their homes in the drab and poor town, located northeast of Sarajevo and close to the border with Serbia.

6. Marzabotto Massacre:
Angry Nazi Soldiers Execute 770 innocent Italian civilians
What can you say? WWII is the darkest moment of mankind and its legacy is full of massacres, atrocities, and war crimes. The Mazabotto Massacre takes its place next to the numerous atrocities that occurred during that era, and it was one of the very worst, as well. The Monte Sole Massacre, as it's also known, was a series of massacres committed by Nazi troops in Italy between September 29 and October 5, 1944 in the municipalities of Marzabotto. It was part of an operation to eliminate vast factions directed against the partisan Red Star. The Marzabotto Massacre's back-story, however, begins on September 8, 1943. When Italy broke off its alliance with Hitler's Germany, friends became foes; from one day to the next, German forces in the country became occupiers, leaving behind a trail of devastation in their retreat to the north.
What makes the specific massacre so notable and cruel is that all its victims were civilians. An estimated 770 people were innocent civilians and not armed soldiers, which is the main reason why many consider it to be the worst massacre of civilians committed by the Waffen SS in Western Europe during the war.

7. Rape of Belgium :
Not the Kind of Rape You Have in Mind
The "Rape of Belgium" refers to the coordinated sacking of cities and villages, the small scale deportation of citizens, and the multiple murder of civilians in Belgium and, on a smaller scale, in the occupied part of France.

The Rape, a word that had no sexual connotation back in those days, was conducted by regular German soldiers in the first two months of WWI, August and September. It was caused by an irrational fear that the entire German army had for Franc-Tireurs. A Franc-Tireur is a French word that describes a civilian who takes up arms and fights alongside the regular army, often in defense of their own region or town. The specific irrational fear of the German army was the cause for 6,000 Belgians to be killed, along with the destruction of 25,000 homes and other buildings in 837 communities. Once again, in this case the numbers show how merciless and brutal people can be in the name of nationalism.

8. Damour Massacre:
In the Name of Allah, Some Lunatics Take a License to Kill
The Damour Massacre was a reprisal for the Christian sacking of Quarantina on Jan 18. Damour, a Christian town on the main highway south of Beirut, was attacked by the Palestine Liberation Organisation units. Part of its population was killed in the battle or massacred afterward, and the remainder was forced to flee. Between 300 and 600 civilians died. It's not so much the number of dead people that is shocking about this massacre, but the brutality and fanaticism that religion can cause. This is just another example from the hundreds in history.

According to an eyewitness, the attack took place from the mountain behind. "It was an apocalypse," said Father Mansour Labaky, a Christian Maronite priest who survived the massacre at Damour. "They were coming, thousands and thousands, shouting 'Allahu Akbar! Let us attack them for the Arabs, let us offer a holocaust to Mohammad!' And they were slaughtering everyone in their path, men, women and children."

9. Bleiburg Tragedy:
Over 100,000 dead people in a series of crimes during and post WWII
The tragedy of Bleiburg is another shameful atrocity that the brutality of WWII left behind, unfortunately. It was not a single event, but hundreds of events over a long period of time. Unlike Hiroshima or Dresden, Bleiburg was not an act of war. It was an act of post-war retribution. The initial killings near the Austro-Yugoslav border were followed by the execution of members of the Croatian government. There were massacres at other sites. Some, like Kamnik, involved a few thousand deaths. Others, like Maribor, saw over 40,000 die. Jerca Vodušek Starič, a Slovene historian, claims that it would be impossible to learn the exact number of dead people. However, today the official number reaches 14,531 Slovenes and an estimated 65,000 to 100,000 Croats, many of them civilians.

Posted by S.V.Sai baba at 5:26 PM No comments: Links to this post