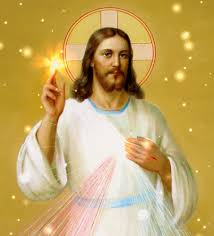 On the occasion of Christmas eve, I am glad to post the biography of Jesus Christ  as received by way of mail from a friend. The biography is short and covers the major events of his life.

Jesus Christ was born circa 6 B.C. in Bethlehem. Little is known about his early life, but as a young man, he founded Christianity, one of the world’s most influential religions.

His life is recorded in the New Testament, more a theological document than a biography. According to Christians, Jesus is considered the incarnation of God and his teachings an example for living a more spiritual life. Christians believe he died for the sins of all people and rose from the dead.

Most of Jesus's life is told through the four Gospels of the New Testament Bible, known as the Canonical gospels, written by Matthew, Mark, Luke and John. These are not biographies in the modern sense but accounts with allegorical intent. They are written to engender faith in Jesus as the Messiah and the incarnation of God, who came to teach, suffer and die for people’s sins.

Jesus was born circa 6 B.C. in Bethlehem. His mother, Mary, was a virgin who was betrothed to Joseph, a carpenter.

Christians believe Jesus was born through Immaculate Conception. His lineage can be traced back to the house of David. According to the Gospel of Matthew (2:1), Jesus was born during the reign of Herod the Great, who upon hearing of his birth felt threatened and tried to kill Jesus by ordering all of Bethlehem’s male children under age two to be killed. But Joseph was warned by an angel and took Mary and the child to Egypt until Herod’s death, where upon he brought the family back and settled in the town of Nazareth, in Galilee.

There is very little written about Jesus's early life. The Gospel of Luke (2:41-52) recounts that a 12-year-old Jesus had accompanied his parents on a pilgrimage to Jerusalem and became separated. He was found several days later in a temple, discussing affairs with some of Jerusalem’s elders. Throughout the New Testament, there are trace references of Jesus working as a carpenter while a young adult. It is believed that he began his ministry at age 30 when he was baptized by John the Baptist, who upon seeing Jesus, declared him the Son of God.

After baptism, Jesus went into the Judean desert to fast and meditate for 40 days and nights. The Temptation of Christ is chronicled in the Gospels of Matthew, Mark and Luke (known as the Synoptic Gospels).

The Devil appeared and tempted Jesus three times, once to turn stone to bread, once to cast himself off a mountain where angels would save him, and once to offer him all the kingdoms of the world. All three times, Jesus rejected the Devil's temptation and sent him off.

Jesus returned to Galilee and made trips to neighboring villages. During this time, several people became his disciples. One of these was Mary Magdalene, who is first mentioned the Gospel of Luke (16:9) and later in all four gospels at the crucifixion. Though not mentioned in the context of the "12 disciples," she is considered to have been involved in Jesus's ministry from the beginning to his death and after.

According to the gospels of Mark and John, Jesus appeared to Magdalene first after his resurrection.

According to the Gospel of John (2:1-11), as Jesus was beginning his ministry, he and his disciples traveled with his mother, Mary, to a wedding at Cana in Galilee. The wedding host had run out of wine and Jesus's mother came to him for help. At first, Jesus refused to intervene, but then he relented and asked a servant to bring him large jars filled with water. He turned the water into a wine of higher quality than any served during the wedding. John's gospel depicts the event as the first sign of Jesus's glory and his disciples' belief in him.

After the wedding, Jesus, his mother Mary and his disciples traveled to Jerusalem for Passover. At the temple, they saw money changers and merchants selling wares. In a rare display of anger, Jesus overturned the tables and, with a whip made of cords, drove them out, declaring that his Father’s house is not a house for merchants. 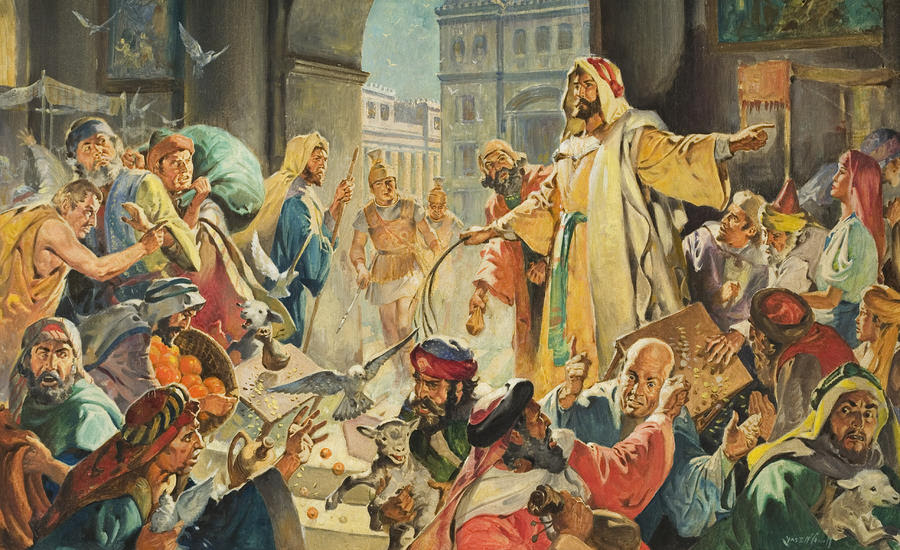 The Synoptic Gospels chronicle Jesus as he traveled through Judea and Galilee, using parables and miracles to explain how the prophecies were being fulfilled and that the kingdom of God was near. As word spread of Jesus's teaching and healing the sick and diseased, more people began to follow him. At one point, Jesus came to a level area and was joined by a great number of people.

There, at the Sermon on the Mount, he presented several discourses, known as the Beatitudes, which encapsulate many of the spiritual teachings of love, humility and compassion.

Jesus continued preaching about the kingdom of God, the crowds grew larger and began to proclaim him as the son of David and as the Messiah. The Pharisees heard of this and publicly challenged Jesus, accusing him of having the power of Satan. He defended his actions with a parable, then questioned their logic and told them such thinking denied the power of God, which only further hardened their resolve to work against him.

Near the city of Caesarea Philippi, Jesus talked with his disciples. According to the gospels of Matthew (16:13), Mark (8:27) and Luke (9:18), he asked, "Who do you say that I am?" The question confused them, and only Peter responded, saying, "You are the Christ, the Son of the living God." Jesus blessed Peter, accepting the titles of "Christ" and the "Son of God," and declared the proclamation was a divine revelation from God. Jesus then proclaimed Peter to be the leader of the church. Jesus then warned his disciples of the Pharisees’ conspiracy against him and of his fate to suffer and be killed, only to rise from the dead on the third day.

Less than a week later, Jesus took three of his disciples to a high mountain where they could pray alone. According to the Synoptic Gospels, Jesus's face began shining like the sun and his entire body glowed with a white light. Then, the prophets Elijah and Moses appeared, and Jesus talked to them. A bright cloud emerged around them, and a voice said, "This is my beloved Son, with whom I am well pleased; listen to him." This event, known as the Transfiguration, is a pivotal moment in Christian theology. 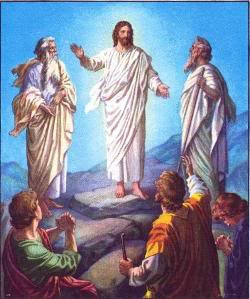 It supports the identity of Jesus as the Christ, the Son of the living God.

Jesus arrived in Jerusalem, the week before the holiday of Passover, riding on a donkey. Great numbers of people took palm branches and greeted him at the city's entry. 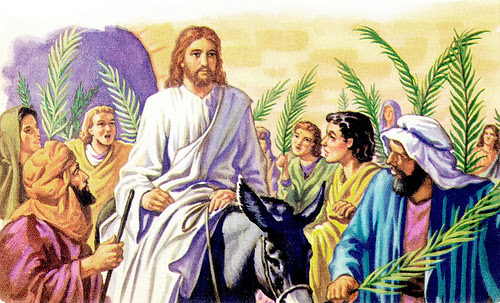 They praised him as the Son of David and as the Son of God. The priests and Pharisees, fearful of the growing public adulation, felt he must be stopped.

All four Gospels describe Jesus's final week in Jerusalem. During this time, Jesus raised Lazarus from the dead, confronted money changers and merchants in the temple, and debated with the high priests who questioned Jesus's authority. He told his disciples about the coming days and that Jerusalem's temple would be destroyed. Meanwhile, the chief priests and elders met with high priest Caiaphas, and set plans in motion to arrest Jesus. One of the disciples, Judas, met with the chief priests and told them how he would deliver Jesus to them. They agreed to pay him 30 pieces of silver.

Jesus and his 12 disciples met for the Passover meal, and he gave them his final words of faith. He also foretold of his betrayal by one of the disciples and privately let Judas know it was he. Jesus told Peter that before a rooster crowed the next morning, he would have denied knowing Jesus three times. At the end of the meal, Jesus instituted the Eucharist, which in the Christian religion, signifies the covenant between God and humans.

After the Last Supper, Jesus and his disciples went to the Garden of Gethsemane to pray. Jesus asked God if this cup (his suffering and death) might pass by him. He implored a group of his disciples to pray with him, but they kept falling asleep. Then the time had come. Soldiers and officials appeared, and Judas was with them. He gave Jesus a kiss on the cheek to identify him and the soldiers arrested Jesus. One disciple tried to resist the arrest, brandished his sword and cut the ear off one of the soldiers. But Jesus admonished him and healed the soldier's wound.

After his arrest, many of the disciples went into hiding. Jesus was taken to the high priest and interrogated. He was hit and spat upon for not responding. Meanwhile, Peter had followed Jesus to the high priests' court. As he hid in the shadows, three house servants asked if he was one of Jesus' disciples and each time he denied it. After each denial, a rooster crowed. Then Jesus was led out of the house and looked directly at Peter. 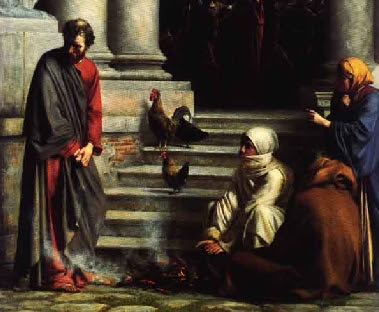 Peter remembered how Jesus had told him he would deny him and he wept bitterly. Judas, who was watching from a distance, became distraught by his betrayal of Jesus and attempted to return the 30 pieces of silver. The priests told him his guilt was his own. He threw the coins into the temple and later hanged himself.

The next day, Jesus was taken to the high court where he was mocked, beaten and condemned for claiming to be the Son of God. He was brought before Pontius Pilate, the Roman governor of Judea. The priests accused Jesus of claiming to be the king of the Jews and asked that he be condemned to death.

At first Pilate tried to pass Jesus off to King Herod, but he was brought back, and Pilate told the Jewish priests he could find no fault with Jesus. The priests reminded him that anyone who claimed to be a king speaks against Caesar. Pilate publicly washed his hands of responsibility, yet ordered the crucifixion in response to the demands of the crowd. The Roman soldiers whipped and beat Jesus, placed a crown of thorns on his head and then led him off to Mount Calvary.

Jesus was crucified with two thieves, one at his left and the other at his right. Above his head was the charge against him, "King of the Jews." At his feet were his mother, Mary, and Mary Magdalene. 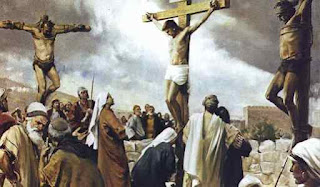 The Gospels describe various events that occurred during the last three hours of his life, including the taunting by the soldiers and the crowd, Jesus's agony and outbursts, and his final words. While Jesus was on the cross, the sky darkened, and immediately upon his death, an earthquake erupted, tearing the temple's curtain from top to bottom. A soldier confirmed his death by sticking a spear into his side, which produced only water. He was taken down from the cross and buried in a nearby tomb.

Risen from the Dead

Three days after his death, Jesus's tomb was found empty. He had risen from the dead and appeared first to Mary Magdalene and then to his mother Mary.

They both informed the disciples, who were in hiding, and later, Jesus appeared to them and told them not to be afraid. During this brief time, he beseech-ed his disciples to go into the world and preach the gospel to all humanity. After 40 days, Jesus led his disciples to Mount Olivet, east of Jerusalem. Jesus spoke his final words to them, saying that they would receive the power of the Holy Spirit, before he was taken upward on a cloud and ascended into heaven.