Character assassination is a deliberate and sustained process that aims to destroy the credibility and reputation of a person, institution, social group, or nation.
Agents of character assassinations employ a mix of open and covert methods to achieve their goals, such as raising false accusations, planting and fostering rumours, and manipulating information.
It  is an attempt to tarnish a person's reputation. It may involve exaggeration, misleading half-truths, or manipulation of facts to present an untrue picture of the targeted person.
Source :https://en.wikipedia.org/wiki/Character_assassination
Character assassination is dirty fighting, make no mistake about it. It can be cowardly (like anyone who bad-mouths you behind your back to friends or colleagues), or it can be in-your-face (like politicians who make no secret about their intent to wreck an opponent's reputation).
Who are the people indulging in Character Assassination?
First let's take a quick look at the kinds of people who engage in this sort of tactic, and what you can learn about them. 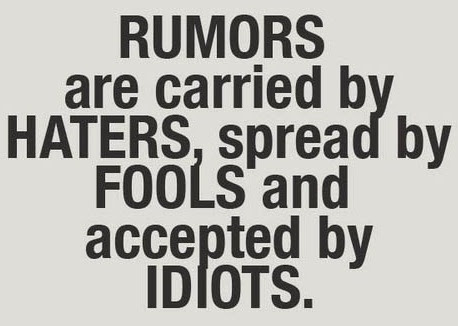 The Jealous
You used to be their friend/co-worker, and now it looks like you're moving on socially or professionally. They don't want to be left behind, and so rather than let you go, this idiot is going to try to wreck the place you're going to before you get settled in. They're dangerous because they have perceived credibility ("Yeah, I worked with/have known Jane for years...") due to their previous association with you. This type of person often engages in character assassination as a by-product of regret -- namely, regret about losing control or 'ownership' of you (typically after facilitating your introduction to the very area you're moving on to).
The Angry
They're frustrated actors/musicians/writers who are stuck paying the bills doing some job they hate which is unrelated to their passion (probably because they aren't any good at what that is).
Don't pay much attention to these people, as 1) they're pretty much angry at everyone equally, and 2) they won't have much ammunition to throw at you because they're too busy being angry all the time, at everyone.
The Devious
These are the most dangerous of the types of people who will try to wreck your character, most of all because they're usually sociopaths. These people don't hate you, these people see the destruction or damage of your character as a means to an end in realizing their own goals. They usually have no conscience or sense of remorse, nor do they care what happens to you after they've destroyed you.
The Envious
This one here's usually at the root of nearly all character assassinations, and the envious persons will bent upon spreading false information/half truth to tarnish the image of the persons whom they are envious.
What are the modes of Character Assassination?
Character Assassination was extensively used in early days and even now to certain extent by way of spreading false rumours in print media which is popularly known as 'Yellow Journalism.'

Yellow journalism, or the yellow press, is a type of journalism that presents little or no legitimate well-researched news and instead uses eye-catching headlines to sell more newspapers. Techniques may include exaggerations of news events, scandal-mongering, or sensationalism.

Popular politicians,film personalities,famous businessmen etc. are normally the targets for Yellow Journalism not only for damaging the reputation of such persons but also for extracting money from them by way of blackmailing that the damaging news will be spread if money is not paid.

With the invent of Computers,Internet and Social media, persons have started using emails,WhatsApp ,Twitter etc. to spread such messages of Character Assassination. This is not only very cheap way of spreading the messages but also a quick way of communication.

Persons spreading such false messages to damage the reputation of their opponents never bothered to think about the feelings of the persons affected.To get cheap popularity in the society they will always try to project their opponents in bad light.

Salvation:
But here's the problem that faces every would-be character assassin, and the one thing that will save you in the end: the double-check.
Very few people will simply take whatever crazy slanderous thing someone says at face value, without doing their own version of the double-check (and if they do, then you didn't need them in your damned tent in the first place). Some will become more observant, some will ask some subtle questions, and some will ask some not-so-subtle questions.
Solution for tackling persons indulging in Character Assassination:
Don't fight back. At least, don't lower yourself to use the tools the would-be character assassin has inarguably lowered themselves by using.
The best defense against any character assassination is to maintain your integrity and take pride in what you do, whatever that may be. Fighting back just feeds the fire, and clouds the issue.
Ultimately, character assassination has absolutely nothing to do with YOU; it has everything to do with the person who's engaging in it. And THAT, should make you feel better and allow you to leave it behind you, where it belongs.
Source:http://www.huffingtonpost.ca/ryan-pannell/character-assassination_b_6017046.html

Details of Goods and Services Tax (GST) and its impact After being subject to months of haggling and histrionics, the Goods & Services Tax (GST) finally had its historic day in the Rajya Sabha with the passage of the Bill to amend the Constitution, paving the way for what is popularly referred to as the concept of “one nation, one tax.”

However, the landmark legislation still needs to clear some more hurdles before the bill becomes a law, enforceable by the April 1, 2017 deadline.

Here are some details about GST and its impact:

What is Goods and Services Tax (GST)?
It is a broad-based and comprehensive tax on manufacture, sale and consumption of goods and services at a national level.

What is the objective of GST?
To remove multiplicity of taxes across states to create a single national taxation system, as well as a single common market

How will it work?
GST is envisaged as a consumption tax, and hence the tax is passed on until the last stage, wherein the customer of the goods and services bears the tax.

What are some of the key inefficiencies of the current tax system?
The current tax system of CENVAT (central VAT) and state VAT (SVAT) suffers from multiple layers and a cascading burden of taxes. The state VAT provides for tax credit for intrastate transactions (within a state), but the present system is unable to provide tax credit for inter-state transactions.

How will GST help?
GST would subsume other forms of indirect taxation, making it easier for businesses to comply with the tax regime. Being a multi-stage tax, GST provides for an input tax credit mechanism (to claim set-offs for tax paid in the prior stages of production / distribution), which is expected to encourage better invoicing and voluntary compliance.

How does the government benefit?
The easier tax structure along with broader tax base (fewer exemptions, and taxing all goods & services) would help to increase revenue collections for the government.

How do corporates benefit?
Companies’ decisions to set up production operations would be influenced not by tax benefits but based on core business efficiency. Also, with the destination-based principle and provision to claim input tax credit, tax rate applicable on exports is likely to be zero, increasing the competiveness of Indian firms

What type of GST structure is likely to be implemented in India?
The nature of GST to be implemented is widely expected to be the Dual GST model with concurrent powers to both center and state to tax both goods and services over a common and identical base.

Which sectors stand to lose, gain from the implementation of GST?
Consumption (warehousing consolidation), logistics (more movement of heavy vehicles), house building materials (lower duties), and industrial manufacturing would likely experience a positive impact; oil & gas could see a negative impact, while cigarettes could see a negative impact only if overall tax incidence goes up, which may be a low-probability event. The remaining sectors would likely see a neutral impact. 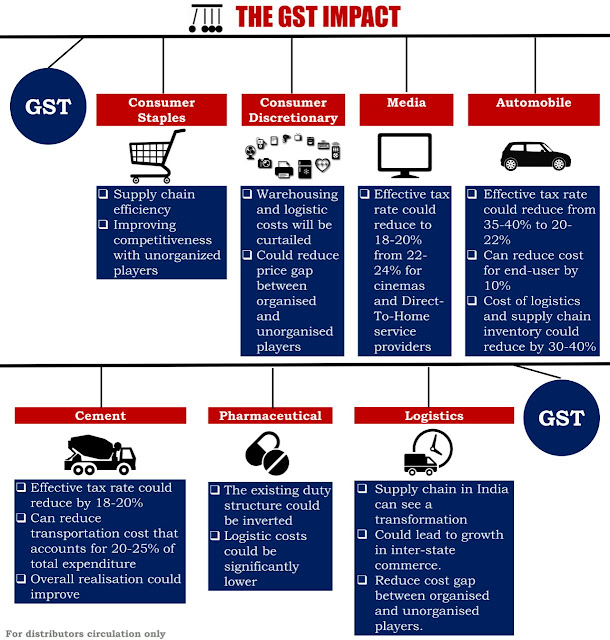 GST Impact on Sectors/Companies in a Nutshell

11) LOGISTICS - major benefits to logistics sector no impact of GST